A Queens College graduate student is receiving a much-deserved full-tuition scholarship to teach students with disabilities.

Meldryck Parraga, who is of Ecuadorian and Dominican heritage, grew up in a Spanish-speaking household in Queens. His father was a painter and his mother was a hairdresser.

Parraga, interested in soccer at a young age, played in clubs in Flushing. He player soccer for Bronx Community College, where he earned his associate’s degree and won the Sportsman of the Year Award.

His next move was to Queens College, where he earned a degree in social studies education with a minor in political science. As a recipient of the Greenmail Scholarship, all of his tuition and fees for graduate work is covered.

“This means the world to me. I never expected to receive a scholarship,” he said .”It will provide me with the means to further my education while also allowing me to help out my parents. It definitely relieves the financial strain.”

Parraga is the first in his family to earn a college degree. He has two younger brothers, one of whom will be graduating from CUNY York College this year.

As part of his graduate study, Parraga will begin his first full-time teaching gig at the August Martin High School in South Richmond Hill, where he grew up and still lives. During the Summer of Hell, when Penn Station was upgrading its tracks and LIRR service was reduced, express bus service was offered from Belmont Park to accommodate commuters. The pols believe this service should be made permanent.

“We have a shortage of mass transit options in Eastern Queens and Western Nassau,” Grodenchik said. “There is no subway service and limited railroad service; buses are our only form of mass transit. Commuters could park at Belmont and take a direct ride to Manhattan.” She will speak about “AT&T and the Local Communities.” The event takes place from 8 to 10 a.m. at the Student Union.

Shorenstein oversees the external and legislative affairs for AT&T from Maine to Virginia. She was previously president of AT&T New York State.

The AT&T executive previously served as communications director for Governor Andrew Cuomo’s 2010 campaign. Prior to that, she worked as a senior manager for strategic planning and corporate communications for the New York Jets.

Breakfast will be served at the event. It’s free and open to the public, but seating is limited.

The RSVP deadline is September 6. Sign up online here. Assemblywoman Nily Rozic and U.S. Senator Chuck Schumer announced earlier this week that the Department of Transportation (DOT) will install a crosswalk at Main Street and Blossom Avenue.

If you recall, elected officials called for traffic safety measures at the intersection back in April 2016 after a young couple was struck trying to cross the street in October 2015.

After some pushing and prodding, DOT is expected to paint the crosswalk before the end of the year.

“For too long, the intersection of Blossom Avenue and Main street has been a problem plagued road for nearby residents and businesses,” Schumer said. “A new crosswalk will help ensure the safety of pedestrians frequenting the bustling area by providing a visual cue to drivers.”

Rozic noted that public schools, residential buildings, a local health center, the Queens Botanical Garden and senior center are all along the busy street.

“The Flushing community has consistently advocated for traffic safety improvements in the neighborhood and I am glad to finally announce DOT’s plan to install a crosswalk across Blossom Avenue,” Rozic said.

The debate league offered three weeks of summer debate camps for students prior to the Summer Classic.

Rozic served as a guest judge for the tournament, which included students from the 6th to 12th grades from MS 74 Nathaniel Hawthorne, IS 237, Francis Lewis High School, Queens High School for the Sciences at York College, St. Francis Preparatory and World Journalism Preparatory. 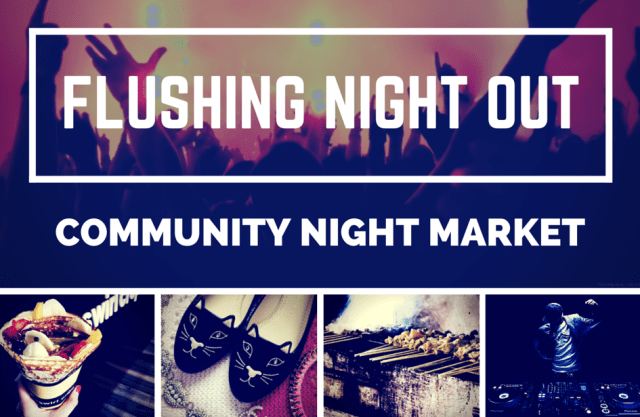 Flushing Night Out will take place on Friday August 18th & Saturday August 19th from 6-11pm. Flushing Night Out offers a unique programming mix of arts and live entertainment from our community, in addition to its main draw of world cuisines converging at one location the Flushing Meeting House, 137-16 Nothern Blvd, Flushing

In 2015, the Greater Flushing Chamber of Commerce established Flushing Night Out as the first community market and social event for the neighborhood of Flushing, New York.  Flushing Night Out seeks to bring together all the people who live and work in the Flushing community, showcase our amazing cultural diversity, promote small businesses, and make Flushing, NY a destination for the world. Flushing Night Out features area restaurants and businesses as well as live music and entertainment from local artists.

Anchors will be on site from 10 AM to 12 PM and the adoption will take place from 10 AM to 4 PM. This nationwide pet adoption campaign will include the participation of more than 80 Tri-State local animal shelters and rescues.

All participating animal shelters and rescue organizations will offer reduced cost or waived pet adoption fees to help famalies adopt a new pet. Participants are encouraged to contact each Clear the Shelters participating shelter in advance as adoption related costs or fees will vary by location.

For a listing of participating shelters and rescues visit http://nbcnewyork.com/cleartheshelters or http://telemundo47.com/desocuparlosalbergues. Be sure to join the NBC team and Second Chance Shelter at PETCO on the Horace Harding Exp in Little Neck to find your new best friend!

The Queens Botanical Garden, in partnership with the Taipei Economic and Cultural Office (TECO-NY), will feature a stunning display of over 300 pots containing exquisite Taiwanese orchids. Each day from 1 to 3pm, Taiwanese watercolor painter Che Min Hsiao will create live paintings of the orchids. Hsiao’s new exhibit, Sitting with the Garden, is comprised of site-specific watercolor paintings that are inspired by Hsiao’s memories of Taiwan. On Saturday and Sunday from 10am to 4pm visitors are invited to make an orchid-themed craft. At Taiwan: A World of Orchids visitors will enjoy a stunning display of orchids and a day filled with art and culture. Free with Admission. Chu comes to the senior center with years of community engagement experience that will help strengthen member interactions, according to Rozic.