Youngsters can enjoy a celebration of Halloween, Dia de los Muertos and All Saints Day all in one at 7 p.m. this evening at Flushing Town Hall, located at 137-35 Northern Blvd.

Attendees are encouraged to wear their costumes for the evening of mask making, All Saints Day Medallions, Dia de los Muertos candy skulls and ghost stories.

There will be sweet treats for all.

For over a half-century, Democrats and Republicans have taken turns at presiding over the economy, guiding and managing our national debt, deficit and social programs to the brink of bankruptcy.

We have spent many decades switching seats, but changing nothing. Both parties continue to debate how to spend money we don’t have and ignore the fiscal crisis we face. We have been repeating the process of voting for one or the other expecting different results, a process Albert Einstein called “insanity”.

There is no doubt that a majority of citizens disapprove of the path our country is on. Let me suggest a course of action that would make this election remarkable. Vote for candidates from a party other than Democrat or Republican.

Non-incumbent candidates will have fewer ties to the established corrupt network of lobbyists, may have a different perspective of their role as representatives, may be innovative and offer new ideas.

Whatever kind of government the new candidates create, it can’t be any worse than what we have now. If the new candidates are ineffective, we can replace them at the end of their terms. Elections and voting are the best tried and true means of term limits.

By reducing the number of incumbents that are elected, we are sending a message that no one in Congress is indispensable. What is indispensable is our constitutional right to vote and elect those who will best serve their constituents.

Read more opinions at on the Queens Examiner website, or submit yours here.

Transit Wireless CEO William A. Bayne explained that the program is still in the preliminary stages but looks forward to the rest of the seven-phase rollout.

Forty subway stations in both Queens and Manhattan went online last week with the expansion of Transit Wireless WiFi services.

Now 29 new Queens subway stations – and 11 in Manhattan – will see both cellular and wireless services via providers AT&T, T-Mobile, Sprint and Verizon on mezzanines, platforms and passageways following the completion of Phase I and II of the overhaul.

Through a sponsorship from Royal Caribbean International and a total $300 million revenue sharing plan with the Metropolitan Transit Authority (MTA), Transit Wireless is on course to put 39 more stations online by the spring of 2015.

The seven-phase project is slated to provide service to all 277 underground stations by 2017.

“The wireless connectivity provided by the four major U.S. carriers is the core of our network and ensures everyone can have connectivity and access as we roll-out stations in Queens and expand coverage underground,” said Transit Wireless CEO William A. Bayne at a press conference inside the Court Square station in Long Island City last week.

New stations include stops along the R line from Queens Plaza to Forest Hills and Grand Central and 34th Street/Herald Square in Manhattan.

Phase III will include the Flushing-Main St. station in Queens, as well as stations in Lower Manhattan, West Harlem and Washington Heights.

Scavenger hunters, history buffs and park enthusiasts descended on Flushing Meadows Corona Park on Sunday to put a wrap on celebrating both the 50th and 75th anniversary of the two World’s Fairs held in the park.

Sunday was the end of the nearly year-long celebration of the historic events in the park. It began on April 22 when the Parks Department opened the Tent of Tomorrow for one day to the public.

This past weekend, families searched for hidden gems, took part in numerous outdoor activities and sat in on a concert from Beatles cover band Yesterday and Today, which were also honoring the 50th anniversary of the band’s visit to Queens.

Judy Dotson has lived in Forest Hills for the last 20 years, and although she wasn’t born in time to catch the last World’s Fair in Queens 50 years ago, she was out for the scavenger hunt to learn something new and explore the park.

“It was fun and I really learned a lot about the park and the World’s Fair that I didn’t know, and I’ve lived in Queens my whole life,” Dotson said.

Dotson added that while she regularly rides her bike and goes for runs in the park, she never noticed much of the historical significance left behind in the park from the World’s Fair.

“It was really fun,” she said.

Robert and Patty Wiedemeier both attended the 1964 World’s fair as children, however the married couple from Oceanside did not meet until many years later.

“I have vivid memories of sitting in the Pavilion, riding in the Mustang and trying to change the radio,” Robert recalled. “And going to the Sinclair exhibit and making a dinosaur out of molded plastic.”

The couple said they came to the park earlier in the year at the opening ceremonies to reminisce of their childhood in Queens, stopping in at the Queens Museum and the Queens Zoo during their visit.

“It really reminds be of being a kid again,” Robert said. “That was a time when there were no worries.”

With thousands out for the Breast Cancer Awareness walk earlier in the morning and the regular crowds of soccer players, park administrator Janice Melnick said many people who were there for the World’s Fair celebrations also had a chance to see what happens in the park on a daily basis.

“Today was a really wonderful day to be in the park because you got to see so many aspects of what goes on here,” Melnick said. “They really got to explore the park and see how important this park is to this community.” 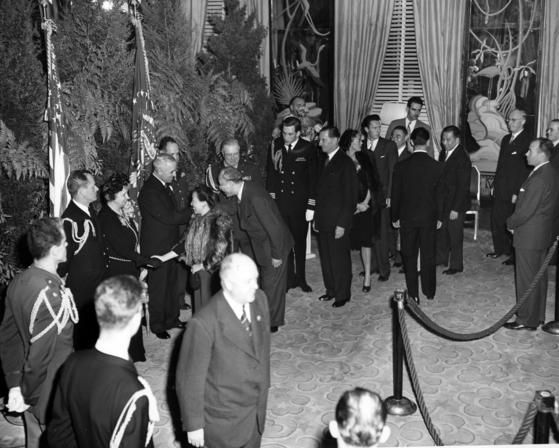 …the United Nations General Assembly came together for the first time in Flushing, Queens at what is now the Queens Museum.

The Assembly utilized the space from 1946 to 1950, when construction was completed on the organization’s permanent Manhattan home.

I am retired, 80 years old and trying to recover from multiple mini-strokes, two major strokes, and bleeding on the brain. The doctor told my wife that I was going to die, but here I am!

The airplane noise has impacted my life and recovery, which is very slow. The airplanes departing LaGuardia Airport start at 6 a.m. and wake me. They are loud and mostly low. Most of the time, they fly right through the morning and afternoon into the evening.

I sit on my front patio, but there is no peace and quiet. I cannot listen to the ballgame on my radio or have a conversation with my wife or anyone else. If the phone rings, I cannot hear what is being said and I cannot jump up and go inside my house because of my disability.

The noise has an adverse effect on my cardiovascular system and my hearing. Something must be done to solve the airplane noise! Elected officials, please help to lower the noise level or eliminate it altogether.

Force the FAA to have a different flight path, maybe over the water like it used to be.

Read more opinions at on the Queens Examiner website, or submit yours here.

In association with the American Heart Association, The Cadwallader Colden School, PS 214, is going to be hosting its annual Teaching Garden Harvest Day today from 9 to 10 a.m.

In the spring, students planted an AHA Teaching Garden at their school in order to promote healthy bodies and minds, and now it is time to reap the harvest of that labor.

The AHA initiated its teaching gardens program in order to help combat the obesity epidemic and improve children’s health from an early age.

According to the AHA, French fries make up one-fourth of children’s vegetable intake and fruit juice accounts for 40 percent of children’s fruit intake. Nearly one in three American children is overweight. Queens native Lauren Schwartzberg was recently crowned National American Miss New York Teen. Judged on a number of categories ranging from academics to formal wear, Schwartzberg particularly stood out in the fields of academics, volunteer service and the interview portion of the competition.

Schwartzberg’s platform raises awareness of the importance of physical activity for one’s mental health. With that in mind, in addition to hours of community service, she will also be training for the New York Marathon and running it for the National Alliance on Mental Health.

Her interest in health and the sciences goes deeper than the pageant work. Having just graduated from Cardozo High School in Bayside, the Jamaica Estates resident attends a seven-year program at the New York Institute of Technology, pursuing a combined osteopath medical school and B.S. degree.

Huang Tiange began playing his musical training at three years old, and now, at 10, he is gaining international notoriety as a talented young prodigy capable of performing difficult classical arrangements flawlessly, as well as composing moving pieces of his own.

He has received multiple awards from the American Society of Music Composers and Producers (ASCAP) for his accomplishments, which include composing his own suite at six years old.

At 3 p.m. today, Tiange will make his New York City debut at Flushing Town Hall, where he will perform three Mozart sonatas and his own original composition, the Xinjiang Suite, a song dedicated to the golden season, or as we know it more commonly here in the U.S., autumn.

Tickets for entry to the show are $10 for students, $12 for members, and $15 for general admission.